May Day - From our correspondents in Paris and Chicago...

Eugene W. Plawiuk gives us a history of May Day – originally published on May Day in 1995, in the Edmonton District Labour Council Newsletter.  Here are some key points:

The international working class holiday, Mayday, originated in pagan Europe.  It was a festive holy day celebrating the first spring planting.  The ancient Celts and Saxons celebrated May 1st as Beltane or the day of fire.  Bel was the Celtic god of the sun.

The Saxons began their May Day celebrations on the eve of May, April 30.  It was an evening of games and feasting celebrating the end of winter and the return of the sun and fertility of the soil.  Torch bearing peasants and villager would wind their way up paths to the top of tall hills or mountain crags and then ignite wooden wheels which they would roll down into the fields

The May eve celebrations were eventually outlawed by the Catholic Church, but were still celebrated by peasants until the late 1700's.  While good church going folk would shy away from joining in the celebrations, those less afraid of papal authority would don animal masks and various costumes, not unlike our modern Halloween.  The revelers, lead by the Goddess of the Hunt; Diana (sometimes played by a pagan-priest in women's clothing) and the Horned God; Herne, would travel up the hill shouting, chanting and singing, while blowing hunting horns. This night became known in Europe as Walpurgisnacht, or night of the witches.

… Mayday celebrations in Europe varied according to locality, however they were immensely popular with artisans and villagers until the 19th Century.  The Christian church could not eliminate many of the traditional feast and holy days of the Old Religion so they were transformed into Saint days.

During the middle ages the various trade guilds celebrated feast days for the patron saints of their craft.  The shoemakers guild honored St. Crispin, the tailors guild celebrated Adam and Eve.  As late as the 18th century various trade societies and early craft-unions would enter floats in local parades still depicting Adam and Eve being clothed by the Tailors and St. Crispin blessing the shoemaker.

… Our modern celebration of Mayday as a working class holiday evolved from the struggle for the eight hour day in 1886.  May 1, 1886 saw national strikes in the United States and Canada for an eight-hour day called by the Knights of Labour.  In Chicago police attacked striking workers killing six.

… In Paris in 1889 the International Working Men's Association (the First International) declared May 1st an international working class holiday in commemoration of the Haymarket Martyrs.  The red flag became the symbol of the blood of working class martyrs in their battle for workers rights.

And here was May Day in Paris this weekend, exclusive photographs provided by Ric Erickson of MetropoleParis, whose words and photographs have appeared previously in Just Above Sunset.  Ric comments that Paris performed its duty with about five parades.  “These are with the CGT, near Bastille.  The CNT poster is from near my place.”  Ric lives in the 14e arrondissement, in a place overlooking the Montparnasse Cemetery where Sartre is buried.  Obviously the folks shown here are not the hyper-chic French one sees in movies like Altman’s Ready To Wear (Prêt-A-Porter), or the lovely Hollywood version of the French one sees in a Hepburn film like, Charade, Paris When It Sizzles, or Funny Face - or the utterly innocent and charming French in An American in Paris.  These are just folks, working folks. 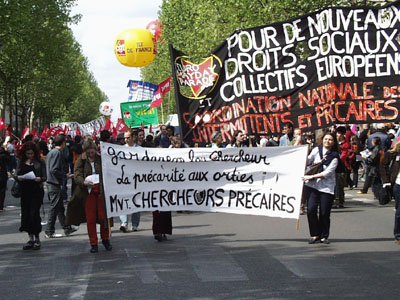 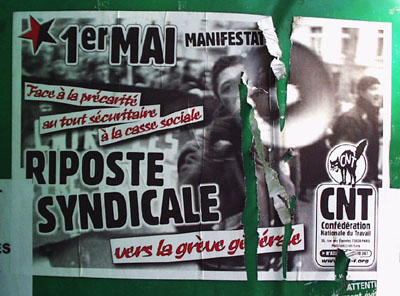 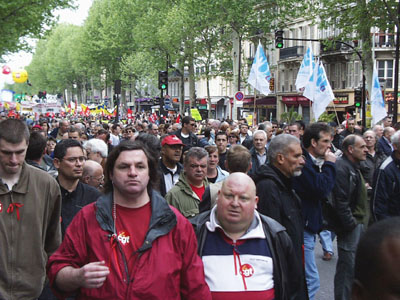 PARIS ON MY MIND: MAY DAY

MAY DAY. May 1, 2004. The day they sell muguets in the streets of France. Muguets.  That's Lily of the Valley.  Dainty little white flowers that grow wildly amidst little bunches of sturdy green leaves.  French law permits normal citizens to take part in the commercial act of selling muguets in the streets without a vendor's license.  Just one of those quirky things about living in France.  As for the history ... well ... better than my recanting, here's some lore mixed with poetry and music.  Try this link.

I don't have a clue who this belongs to but, tant-pis, this is just one of those moments when the open quality of the internet kind of just touches your heart.  Like that feeling you get occasionally milling around the stacks in a library when you realize that the world in its youth has nonetheless been around for awhile and even in the throes of individuality we need to be grateful for the collective big picture, for those who lived, created, built, and perished in the name of some greater larger mightier whole.  The laying on of hands.  The parts of the story we don't know.

Hail the muguets.  If you are in France and don't have your muguet in a tiny bud vase, rush out onto your street, find an enterprising kid, and cough up a few euros for a brin or two of these lovely white bells, tributes to lore.

Well, this virtual postcard (une carte virtuelle) appeared in my email on May Day, addressed to my cat Harriet – from a cat named Rufus in Chicago. 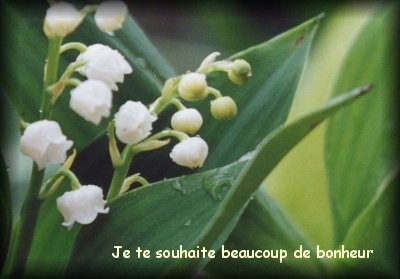 Here’s Rufus – and the owner of Rufus – or guardian or keeper or companion or whatever term is correct these days – add this: Rufus' full name, by the way, is William Rufus, after the English king and son of William the Conqueror, who was killed when he was shot in the eye with an arrow in the New Forest.  My mother named him, so don't blame me.  And the keeper of this beast adds that Rufus is almost as deranged at he looks. 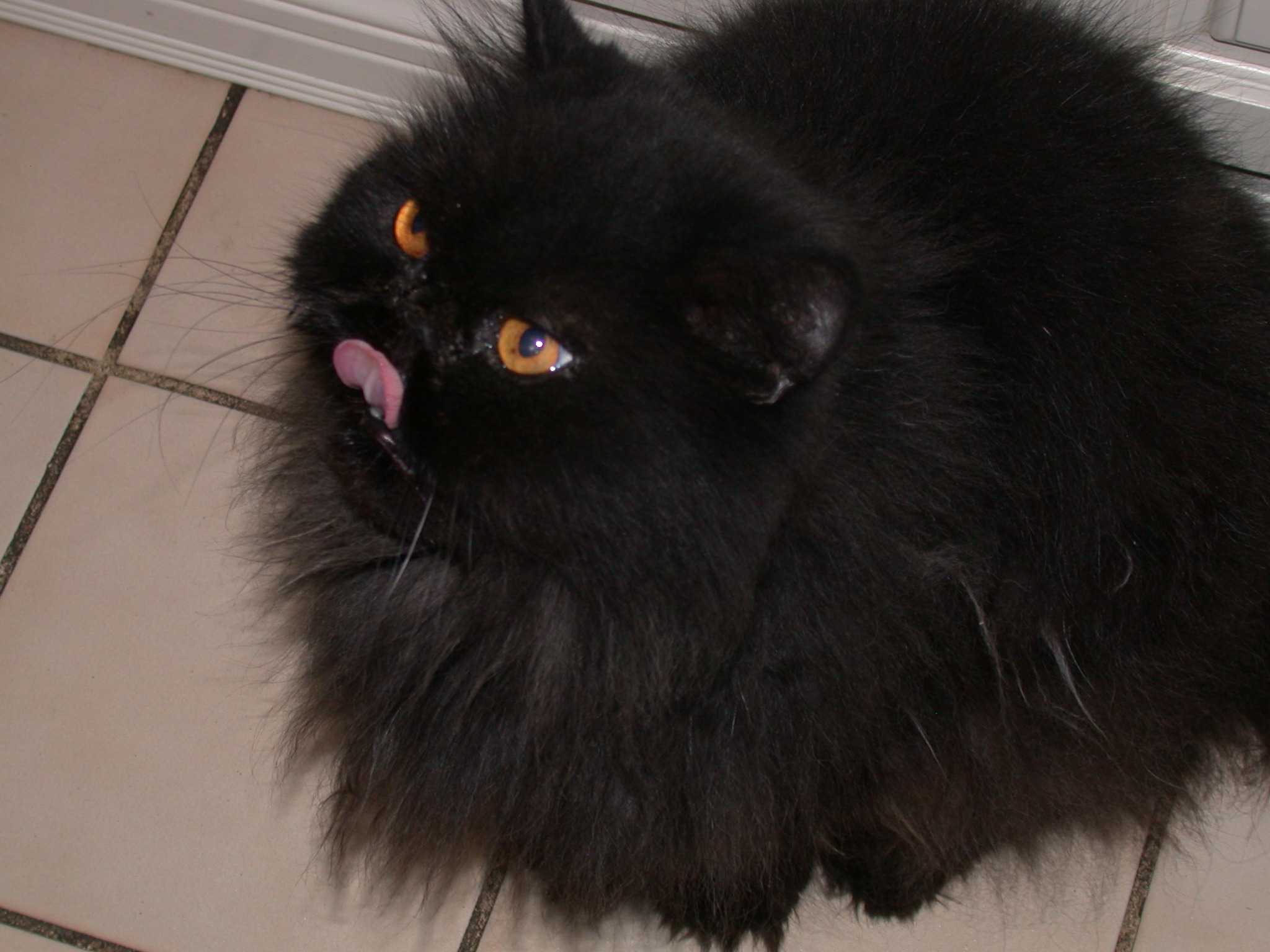 Were Rufus in Paris he’d hang out here, of course – another photo from our correspondent in Chicago. 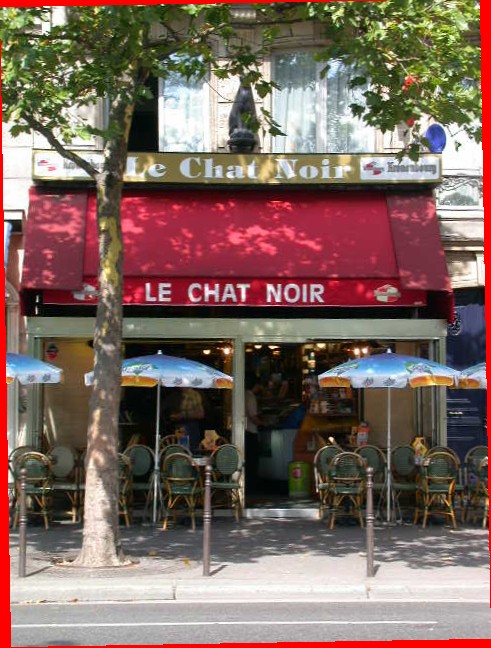 Also our correspondent in Chicago adds this shot – from a rue de Rivoli protest.  The picture was taken in July of 2002 when I was wandering up and down the street, killing time while waiting for the Tour de France to come through.  The building was across the street from the Metro stop there, I think.  I think there's some graphic arts people or someone in there, and I would like very much to know what they were protesting.

Could it be the photo of the façade on rue de Rivoli in this photo is related to this "Rivolitionary On Rivoli" item from Ric over at MetropoleParis?   "One of the signs the artists' have made says, ‘C'est la Rivolition!’  None of the big-bucks commercial establishments on this part of Rivoli have a better slogan." 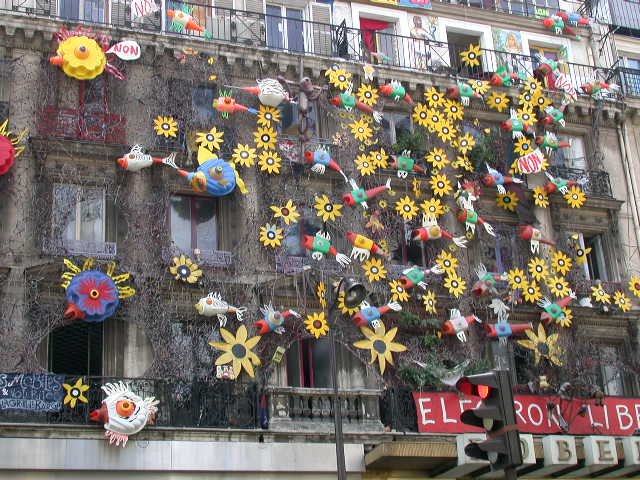 But I’m not sure what kind of protest this is – as our correspondent in Chicago finds a dragon in the middle of the Medici fountain in the Luxembourg Gardens in the 5e arrondissement in this public domain photograph found on the web.  (My more conventional shot is appended.) 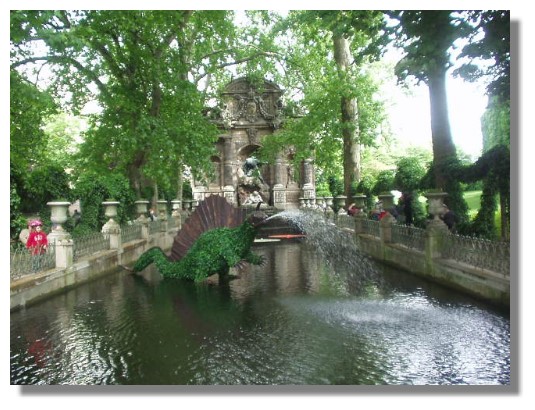 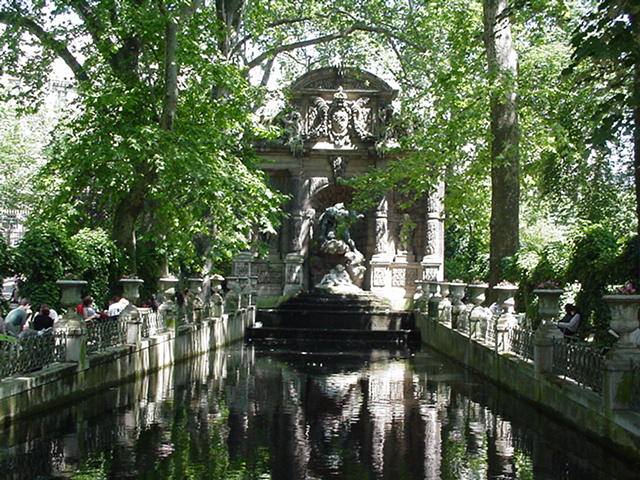 But to end this madness our correspondent in Chicago offers this tree peony shot.  And this bloom would be in Chicago, not Paris. 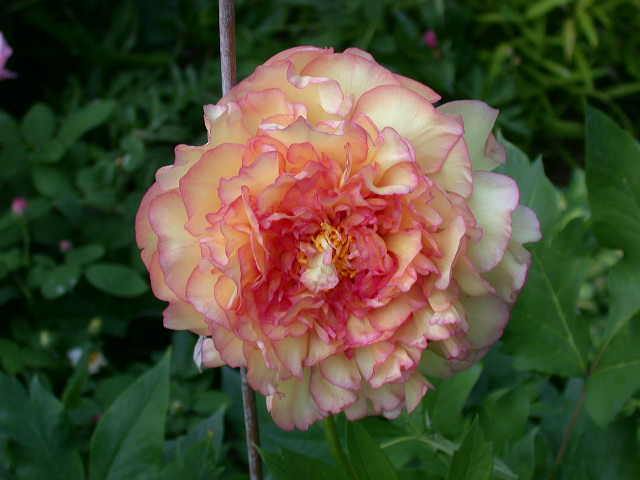 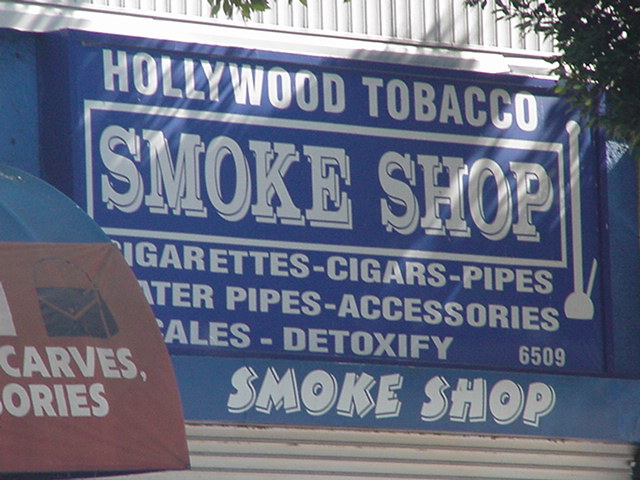